When celebrated director and producer, Michael DiLauro set out to create a new documentary for the City of Pittsburgh, he called upon Emmy winning composer, Chris Orazi of CAS Music Productions to compose the score. We Built This City will air on PBS in markets nationwide. The documentary tells the story of the evolution, struggles and ultimate success of the Allegheny Conference on Community Development in making Pittsburgh, PA, America’s most livable city.

We Built This City features, photos, video and interviews with key residents, business people and city officials. The documentary is set to a musical score recorded and produced by Orazi, and a team of local musicians. “What makes this score great is the fact that it has a unifying theme, yet is diverse enough to provide the flexibility we needed,” said DiLauro. “I’ve worked with Chris that gives at home guitar lessons for over 30 years and admire the creative and sensible approach he takes with the stories I give him. We’ve won many awards with our collaborations and knew he was the right choice for this project.” 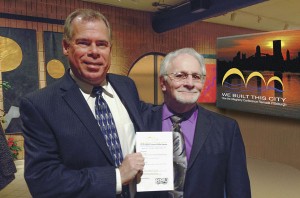 Pictured at the screening of We Built This City are (l to r): Chris Orazi of CAS Music Productions in Vineland and award-winning director, Michael DiLauro.

“This project is particularly special to me because I was born in Pittsburgh and raised for the first years of my life,” said Orazi. “I love the city and surrounding region and have many relatives who still live there. I love working with Michael and we have shared many memories, awards and creative experiences over the years.”

A director and producer of documentaries, television programs, commercials, and corporate productions, DiLauro has earned five regional Emmy’s, a Blue Ribbon at the American Film Festival, several ADDU awards and the Gabriel award for outstanding television programming. He is also the Director of the Academic Media Center and Assistant Professor in the Media Arts Department at Robert Morris University.

We Built This City Music Sample